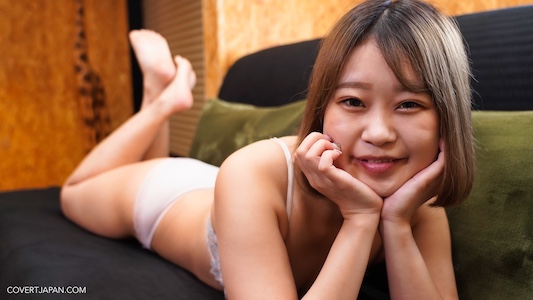 NOTE: I call censored JAV "pro" because it is allowed to operate professionally in Japan, while uncensored "amateur" JAV does not enjoy this privilege.  I am not using the "pro" and "amateur" denominations to specify video quality, shoot budget, etc.  Moving on...

Earlier I mentioned "exceptions," and this usually refers to one of the following scenarios:
1) Shooting a girl before she joins an agency and turns pro.  This is what happened with me and Kurumi.  After working together, she went on to join a pro JAV agency and is now a well-known JAV star.  I was lucky enough to work with her before she turned pro.

It's also interesting to note that some girls "bounce" between the pro and amateur worlds.  They start out doing amateur stuff, then join an agency and do pro censored stuff--only to quit their agency for a bit and go back to uncensored amateur stuff.  Rinse and repeat.

This is why you sometimes see the same girls uncensored on FC2 and censored on R18.

I detest that mosaic in pro censored JAV, but yes indeed they do get some smoking hot girls.  This was my thinking behind establishing the "Focus Army" brand.  With a Japan-facing pixelated brand, perhaps someday I'll work with more pro JAV agency models.

But for now I'm enjoying the pleasures of Japan's ordinary but extraordinary girls-next-door.

BECAUSE THE PRO WORLD HAS A COLDER BUSINESS-LIKE FEELING
Generally speaking, working with pro JAV models has a colder, more business-like feeling to it.  Don't get me wrong--sex with a hot JAV girl is still fun, and of course the overall atmosphere depends a lot on the girl's personality.  However, there are some additional factors to consider when working in the pro JAV world...

* Gotta Wear a Rubber
Many JAV fans don't realize that most of the actors are wearing condoms.  You don't realize this because of the mosaic pixelization.  Condoms are JAV industry standard.  I'm sure there are exceptions, but the only time I've seen real raw sex done at a pro JAV shoot was in the USA with American girls.  This point leads naturally to the next one...

* Some Guy in a Suit (The Pimp)
Often when working with pro JAV models, someone from the agency accompanies the model to the shoot.  It's usually a guy, and sometimes he's even clad in a business suit.  Fortunately, he's not there very long--he's just there to grab the money (lol).  But what a goddamn buzz-kill--it makes the whole thing feel colder and more business-like, fucking up my pervy fantasy.

* "Maguro"
Some of the pro models are dead fish.  In Japanese this expression is very similar--a "maguro" (tuna).  The girl is so incredibly smoking hot that she sees no need to extend much effort on the performance.  She's so damn pretty she can get away with this.

This can and does happen with amateurs too, but the pattern I most often see is this--the hotter they are on the outside, the colder they are on the inside.  Normal-looking amateurs can't get away with just lying there, so they are more skilled at the art of pleasing a man.